Recently I have been reading Barry Jones’ Sleepers Wake – Technology and the future of work, written in 1982 it foresees a post service work environment, technology will have saved us from much toil and we will need a guaranteed income for all (similar to my Flat Payment) to provide for all those who are not employed with the means to survive and participate in the economic and civil life. He imagined a small privileged group who were intelligent and educated and could find high paying technical jobs and a large proportion of people who had no employment. They would need to redefine their purpose living off the guaranteed income and filling their time with community activities, small crafts and hobbies, often making bespoke items or pursuing lifelong intrinsically enriching education. 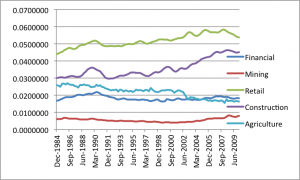 Almost 20 years later this hasn’t occurred, we work longer hours and there are more people in the workforce than ever before. Why? For a start we don’t have a guaranteed income so most of us still need to earn an income just to survive, so instead of embracing a new more free future we created work for ourselves. To analyse this I’ll look at my own industry banking and finance. This was one of the industries expected to be greatly impacted by technological advances, during the 80’s ATM’s (Automatic Teller Machines) were introduced to replace human tellers, computers did all the ledger work, and by the nineties internet banking allowed people to complete their own online loan applications and open accounts and transfer funds. Has the amount of people working in Finance and insurance decreased in Australia? No it’s just above the level as a percentage of population it was in 1984 and around 1990 and 2007 it was significantly above 1984 levels. Part of the reason is that we now do more transactions; open more loans, and refinance more often, but most of these actions use minimal staff. What we have done is create an environment of constant “improvement” constant change. For a period in the 90’s one bank I worked for restructured 4 times in 4 years, each time needing a large project team to implement the changes ,create the PowerPoint displays and the flowcharts and yet another team to dismantle the new procedures a year later. Banking also has a lot of people “communicating” without saying anything its normal for a middle manager to receive 200 emails a day all which need to read and responded to. Little of this “communication” seems necessary often its only purpose is to prove the sender is doing something. As you can see in the next graph we have become professionals and managers whose sole purpose is bureaucracy and change management. 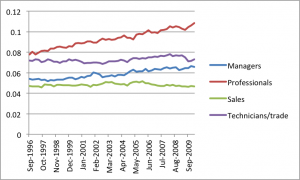 Instead of Jones’ more leisure we have more politics, more spin, more restructures and more implementation, we have become a bunch of lawyers, accountants, project managers and IT tweakers, it keeps us busy and pays the mortgage but is essentially unnecessary. You will note from the first graph that those necessary industries like mining and agriculture don’t employ many people and their output has been increasing massively thanks to technology. And interestingly we have more people working in retail but less in sales, this is because there are more retail managers creating the branding and marketing strategies and less people directly selling. And likewise for construction, a large increase in people working in construction during our housing boom but no corresponding rise in trade employment, carpenters, electricians, and concreters, just more project managers.

Is this a good thing? Well for the unskilled it’s a disaster, for equality it’s tragic and for quality of life it’s pretty miserable too.