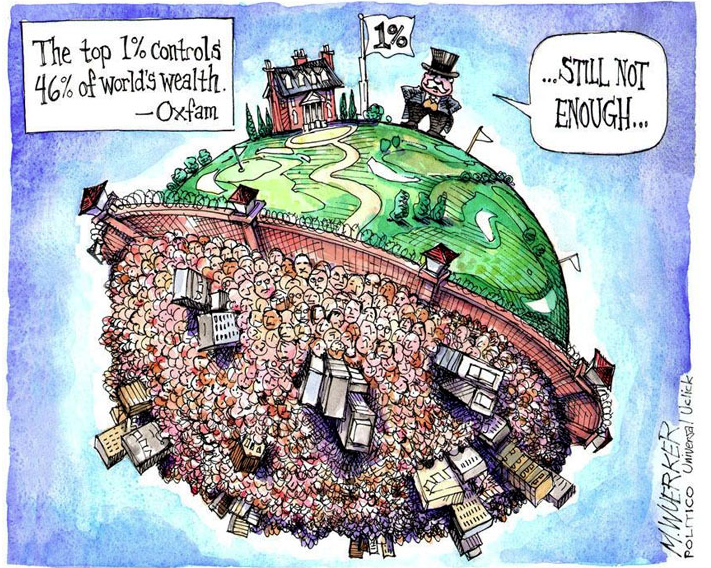 Luck determines the winners and losers of society, not merit or hard work. Those that start out with more get more, and those that start with little often fall through the gaps.

Inequality is not only caused by the human inventions of rent, profit and interest but also by a quirk of the economic system which means that if left to its own devices a few people will end up with the majority of the wealth. They will not get this wealth through merit or hard work, but just because in a game of risk some will win, and those that start out winning have the edge over those who start losing. The inequality is quickly exacerbated until a few people rule the rest.

Italian engineer-turned-economist Vilfredo Pareto noticed in the 19th century that quite a lot of Italy’s wealth seemed to be concentrated in the hands a few wealthy people. He did a few numbers on this observation and found that approximately 20% of the population held 80% of the wealth, and he found that it was the same in other countries. It didn’t depend on the social, political, or economic system; this Pareto Ratio was evident everywhere.

So what causes it? Well, imagine you are investing in business projects, or anything that can return an income or future benefit (houses, employing people, storing food for winter). Some will succeed and others will fail, but your chance of hitting a winner increases if you can make more investments (spread the risk) and you can do this if you are wealthy. Essentially, poor people can’t afford to invest in a failure, and rich people can get it wrong over and over and still come out on top.

To put it in simple terms, imagine a game of heads or tails. Twelve players have $100 each – perfect equality – and each must invest the $100 on the flip of the coin. If they lose all their money then they are out of the game and the winner is the last one who is left. After the first flip six people are out (there must be someone on the other side of the bet), and after the second three people have $300 and three have $100. The three people with $300 have a far greater chance of winning the game than the three on $100. They can get their investment wrong in the next two turns and survive, but the other three only need to get one wrong and they are out. Notice this situation has developed not by guessing right, but just through random chance.

French physicists Bouchard and Mezard tested whether the “luck of the wealthy” could be undone by wealth dispersion from trade. They created an extremely simplistic model of a “wealth distribution network”, i.e.¸ an economy that took into account only three basic distribution factors. The first might be thought of as the “dispersal factor”, and it is the primary means by which wealth spreads itself throughout society. Essentially, this factor consists of nothing more than trade (in both labour and goods). Every time someone purchases a product or a service they transfer money from their own pocket into those of others, and those others then use some of that money to purchase goods and services from others in turn, who then do the same (and so on, and so on).

The second factor might be thought of as the “concentration factor”, and it is the primary means by which wealth accumulates in one place. Essentially, this factor consists of nothing more than investment of money over time. Every time someone purchases a capital good that may accumulate value, or that same person invests money in a profit making venture, that person is sinking wealth into an operation that might draw even more wealth toward it.

Buochard and Mezard then added the risk element; some money is invested and never makes a return, while other investments do well. The concentration factor isn’t risk free. You might think that this would cause a certain social mobility, some people would be rich for a while until Fortuna deals them a bad hand, and their investments go bad and they slip down the ladder. But no! They found that a small percentage of the people always ended up with most of the wealth, and this followed the Pareto Ratio.

This may be because of another factor, which Thomas Pickety says is one of the main drivers of inequality; inherited wealth. If you can hold your advantage in the game of risk by passing it to your children you never fall to the bottom of the ladder because, as stated before, those with more money can afford to lose more often.

The solution is redistribution. Bouchard and Mezard state, “If a fraction of the income tax …are evenly redistributed to all [this] tend(s) to reduce the inequalities of wealth”, whereas if the taxes are not redistributed it can actually increase inequality.

Suburbia – an odd thing to choose

Lender-less borrowing – the end of banks