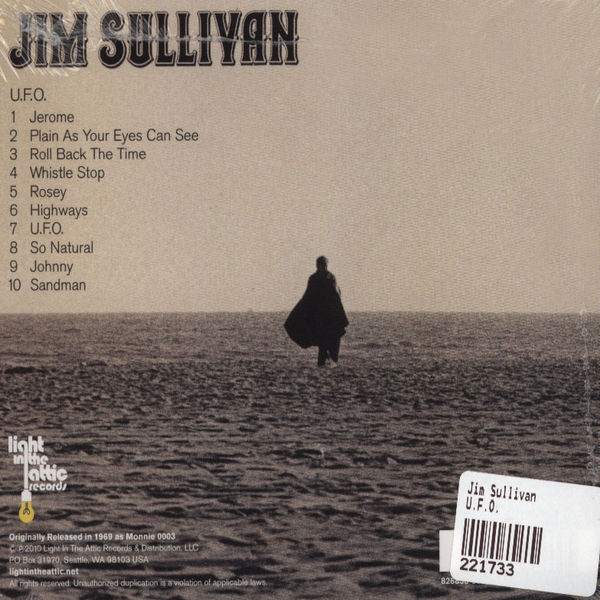 In 1969 the brilliant and enigmatic singer songwriter Jim Sullivan released what may be a prophetic album UFO.

In 2010 a reissue of UFO was released by Light in the Attic an American Reissue label that specializes in obscure albums. The boffins at Light in the Attic spent some time trying to locate the original Master tapes but unfortunately after an extensive search concluded that they were destroyed some time ago.

So they transferred the best music from the vinyl copies available and the results are of a high standard.

In the Title track “UFO” Jim Sullivan sings about going into the desert to look for a UFO that will abduct him “Looking at the Sun dancing through the sky. Did he come by UFO?”

In 1975 the Jim Sullivan story took a turn that made it the stuff of folklore or perhaps conspiracy theories. With his career going nowhere he decided to try and get some session work in Nashville. He took off from Los Angeles through the Joshua tree filled deserts of Nevada. The following day his car was found abandoned with his beloved guitar which was always by his side. Not a sign of the the musician nor any foul play. Sullivan has never been seen since. Could it be that the title track on his 1969 album would become a case of life imitating art?

On the whole UFO is a strangely haunting album – not only because of the back story – with some gorgeous string arrangements and accessible lyrics. The sessions also featured some members of the famous Wrecking Crew. If you are a fan of Fred Neil, Tim Buckley, Tim Hardin or Nick Drake you will easily take to this lost masterpiece .