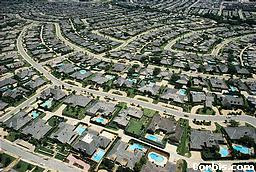 Suburbia – An odd thing to choose

“The cities will be part of the country; I shall live 30 miles from my office in one direction, under a pine tree; my secretary will live 30 miles away from it too, in the other direction, under another pine tree. We shall both have our own car.  We shall use up tires, wear out road surfaces and gears, consume oil and gasoline. All of which will necessitate a great deal of work … enough for all.”

From the vault – this was originally published on JeSaurai.net in 2003

I’ve moved back to the place I was brought up, its a suburb has been for forty years or more, located about 25km from the city centre of Adelaide, and it has been changing. Originally, back 100 or so years ago it was a town, a village I guess in European terms, it had a river (thats what we call them here but its really a creek that now completely dries up in summer), it had sheep farms around it, a main street with churches and pubs, and I assume everything else that went with a small town, butchers, bakers, merchants and traders of all types. The men and women of the farms would come, either by horse or walk to the town centre to buy good and meet there locals, in those churches and pubs. Now though its becoming a growth area for new home buyers, partly due to the government incentives that gave new home builders a grant of $14000, thus the old housing commission houses have been knocked down and new ones built.

It must be said in the suburban sprawl that is the modern Adelaide, Salisbury isn’t even on the fringes, for the suburban area spreads another 15 to 20 km out from the centre of Salisbury. I do not drive a car, always have preferred to walk, for enviromental reasons, pleasure and personal fitness, the world always seemed more real when I strolled slowly along the streets, smelling the eucalyptus and just pondering my own thoughts, when on those rare occasions I meet another walker they often still knod a hello, or quickly comment on the weather, it makes me feel like I live. Which I guess is the point of this article, I don’t think many others feel that anymore, that sense that they are a part of their community, a part of touchable life.

In the past few weeks as I have walked down the road to the Salisbury city centre, a strip mall (to use the Americanism for the enclosed flouro lit shopping centre) and paved street with hairdressers and the local DSS, I have been distracted, almost in fear, because of the actions of the drivers on the road that I walk along. This is a busy road, arterial it should be now called, wide enough to be two lanes in each direction but not yet marked as such, and my walk is about half an hour at a brisk pace, in an almost straight line. From these passing drivers I have had the following: Toots of there horns, people always staring at me, one girl who wanted me to “be my boyfriend” yelled from the rear window as the driver tooted, waves from teenage children, and worst of all rocks the size of a mans fist thrown out from the moving vehicle in an attempt to hit me, and on one occasion at me and my sister. These last incidents were the most worrying to me as a rock traveling at more than 100 km could do some serious damage to me, even death, luckily their aim was not so good and I am still here to write this.

As you may expect this made me wonder why people in cars, which is almost all peopele, seemed to be so fascinated by me walking, and why they felt that they could and would do things that they would rarely ever do if they were face to face with me. The first conclusion is that they feel cocooned, protected in there vehicle and thus feel as though I am no threat, a toy almost to be played with. It seemed more though for some of them seemed like they actually wanted to be friendly, they wanted to make contact, to say “hello”, like the other (few) that I pass who are walking. I thought maybe they feel isolated and actually want to see and communicate with people, real people face to face, and get real reactions.

So why did they feel that they couldn’t? I’ve noticed in big urban enviroments, London, Melbourne, New Delhi, that people do the opposite they either ignore each other or when they do communicate with others its very formal or the opposite and sometimes their emotions explode, but this is dealt with at the time and with human socialabilities (interaction). The fact that all these people (drivers) live in a suburban enviroment seemed to explain their behavior. They were the result of a failed social plan, that exploded particularly in the US and Australia post world war two.

The suburb existed even in the 1800’s, planned park cities popped up in the US, England and Australia as people tried to escape the industrialised and thus polluted and over crowded cities for a ‘half way’ type life. Not country and not city, the best of both worlds, close enough to work and culture but also with trees and animals, and away from the smog and the crowds. It was only in the fifties with the combination of government incentives, the car and open spaces to be filled, that suburbia exploded. They were the first really planned living environs, villages and cities had always grown with the needs and mistakes of those living within them, but now things were planned from the start, roads were built, malls, parks, sewage, and cheap housing were all there before the people arrived. Paradise (there’s actually a suburb in Adelaide called just that).

One needed a car though, because things were so spread out, even a simple task of visiting a friend required a car, or a phone to call them, so what these (our) suburbs have now become reliant upon are, cars, roads, mobile phones, TV, the internet, and many other forms of technology that give us that one thing that cities and villages did so well. Social interaction, just the simplicity of seeing and hopefully talking to our neighbours (they are not just the ones over the adjoining fences), finding out what is really going on in our area, and what people think about it. Unfortunetly today most people get the majority of their social information from talk-back radio, current affairs programs, the internet and tabloid newspapers, rarely if ever speaking to someone new in their own area. And its not their fault, they would look odd, even a threat if they went up to a stranger and started to make conversation, because it is so uncommon.

The drivers throwing things at me and yelling at me are just a result of where they live, they I think would really like to say hello, what do you think about….?, but in a car flying by its impossible, so they yell, and toot, its there veiled attempt at real communication, its sad, but at least it is sort of real. It does freak me out a bit and I wish we had never planned this.